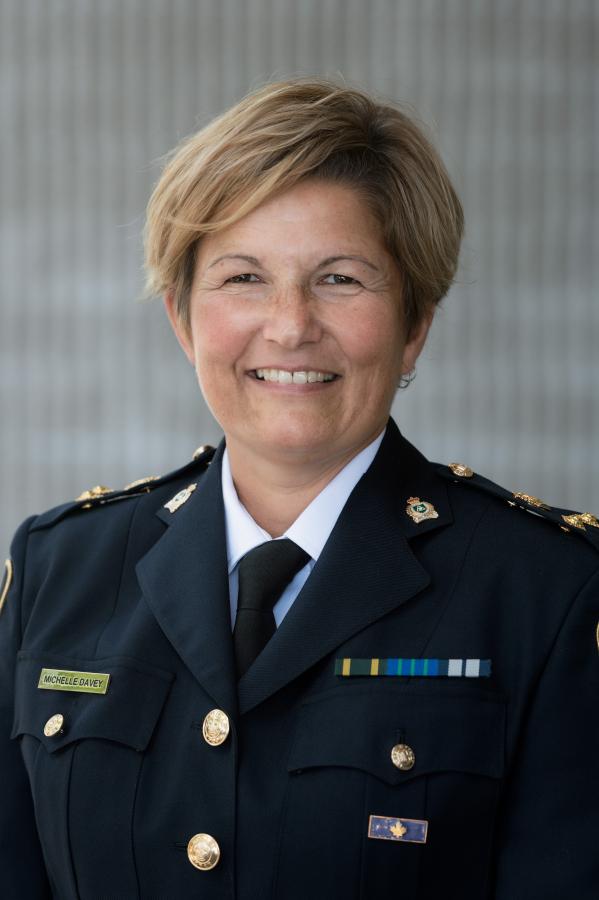 Deputy Chief Michelle Davey joined the Delta Police Department in February 2021, and is the DPD’s first female officer to be named to this rank.

She is responsible for the Administration Bureau of the department, and oversees Recruiting, Human Resources, Training, Information Technology, Professional Standards, Finance, and Department Support services, which Victim Services falls under.

Before joining the Delta Police, Deputy Chief Davey was a Superintendent with the Vancouver Police Department, overseeing Investigative Support Services. In her 24-year career with the VPD, she worked in operations, investigations and administration, holding a variety of leadership roles.

During her time with VPD, she became a recognized subject matter expert in mental health issues, building innovative partnerships to help ensure those experiencing mental health challenges were not criminalized.

Deputy Chief Davey has a strong background in administration, with several accomplishments including overseeing the development of the 2017-2021 VPD Strategic Plan, initiating a new Cybercrime Unit and acting as a Discipline Authority in Police Act matters.

She played a key role facilitating the creation of the BC Women in Law Enforcement Association, and is a passionate supporter of the Cops for Cancer program. She works at a national level on matters of Equity, Diversity and Inclusion in Canadian policing, promoting diversity at all ranks.

Deputy Chief Davey has a Master of Arts in Criminal Justice from the University of the Fraser Valley. She is an accredited Gold Commander for public order incidents, and is a sought-after speaker on a range of public safety topics.

Deputy Chief Davey enjoys spending time with her daughter, hiking with her partner and her partner’s children, road cycling and paddle boarding.