Traffic stops may now be filmed by police

Delta Police is expanding the use of body-worn cameras by its officers, with the Traffic section starting to use these specialized cameras in November. This means that people who are pulled over for speeding or distracted driving may now have an interaction with an officer wearing a body worn camera.

Delta Police began a pilot project in January 2021 with the Axon body-worn cameras, at that point primarily using the cameras during officer training. Use of the cameras was expanded in May, with the creation of the Violence Suppression Team. At that time the Lower Mainland gang conflict was extremely active. The decision marked the first time in BC that a front-line patrol police team had used the camera on a regular basis. 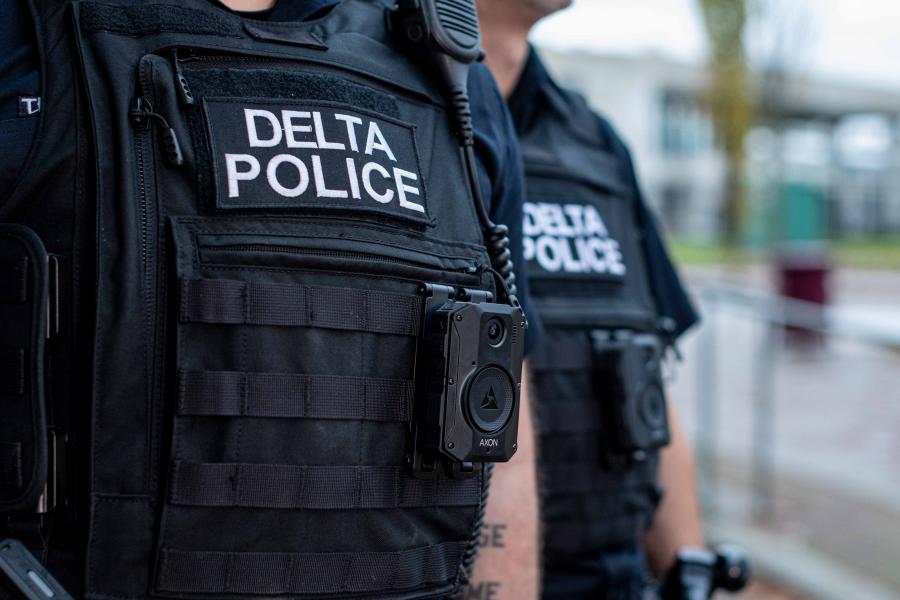 Recently the Delta Police Board has approved an expanded use of the program, with an eight additional cameras assigned to the Traffic Section. The DPD now has 16 Axon Body Worn Cameras in total.

“We expect the cameras to be quite useful by providing supplementary footage of incidents such as people talking or texting on the phones while driving, or even in recording drivers who fail to stop,” says Acting Inspector Brian Hill, who oversees the Traffic Section. He notes that officers conducting stops while using the cameras will be informing the public that the cameras are recording, unless circumstances prevent the officer from having this conversation.

Currently, there are a number of police Traffic sections in the province which use dashcams and audio recorders during traffic stops. This initiative simply puts the camera in a different position during vehicle stops.

The body worn cameras will only be worn by officers in the Traffic Section or Violence Suppression Team, which means not all drivers pulled over by Delta Police officers should expect to be filmed. Traffic officers will use the cameras at their discretion when issuing tickets, and also in situations where they feel there could be a potential for violence or use of force. General duty patrol officers do not have the cameras.

The cameras are high definition, with a wide angle lens, multiple microphones, GPS enabled, encrypted and waterproof. Officers synch the cameras with their phones at the start of their shift, meaning they can easily view footage in real time, zooming in on a licence plate for example to issue a timely alert to officers down the road in the case of vehicle which fails to stop.

Academic studies of body worn cameras show they reduce the use of force by and against police, by affecting the behaviour of individuals who are aware of the recording in progress.

“The body-worn cameras so far have been well received by the general public in Delta,” says A/Insp. Hill. He further notes that Delta Police has established strict policy and digital oversight to ensure the footage captured by the cameras is only accessible to the investigating officer, their supervisor, and others with an investigative or documented need to see the footage

The DPD spent approximately $8,600 to purchase the eight additional cameras, from the existing police equipment budget.