As 2021 rounds into the final stretch Delta Police is taking a look back at crime statistics from the third quarter of the year – from July through September.

“Our analysis shows that the north end of North Delta is experiencing a slightly higher number of collisions, with the spike happening during the afternoon rush hour,” says Deputy Chief Harj Sidhu, who heads Operations for Delta Police.

Persons crimes, also sometimes known as violent crimes, have decreased slightly with 179 offences in the third quarter of 2021, compared to 2020 with 182 offences. Violent crimes includes offences such as assaults or robberies, while the broader category of persons crime also includes harassment files, for example.

“Overall year to date in 2021, we are seeing a slight increase over the previous year in persons offences,” says DC Sidhu. “Assaults are down year to date. These primarily involve assaults occurring between intimate partners or family members, which are calls we take very seriously. In September our officers submitted charges in nearly two-thirds of the domestic assault files.”

Traffic violations decreased in the third quarter of 2021, with 1,619 tickets handed out as opposed to 2,179 traffic violations in the third quarter of 2020. Violation tickets are only one component of the traffic safety strategy, which also includes driver education through presence and visibility, social media campaigns, etc. Additionally officers focused efforts on high priority issues such as impaired driving. 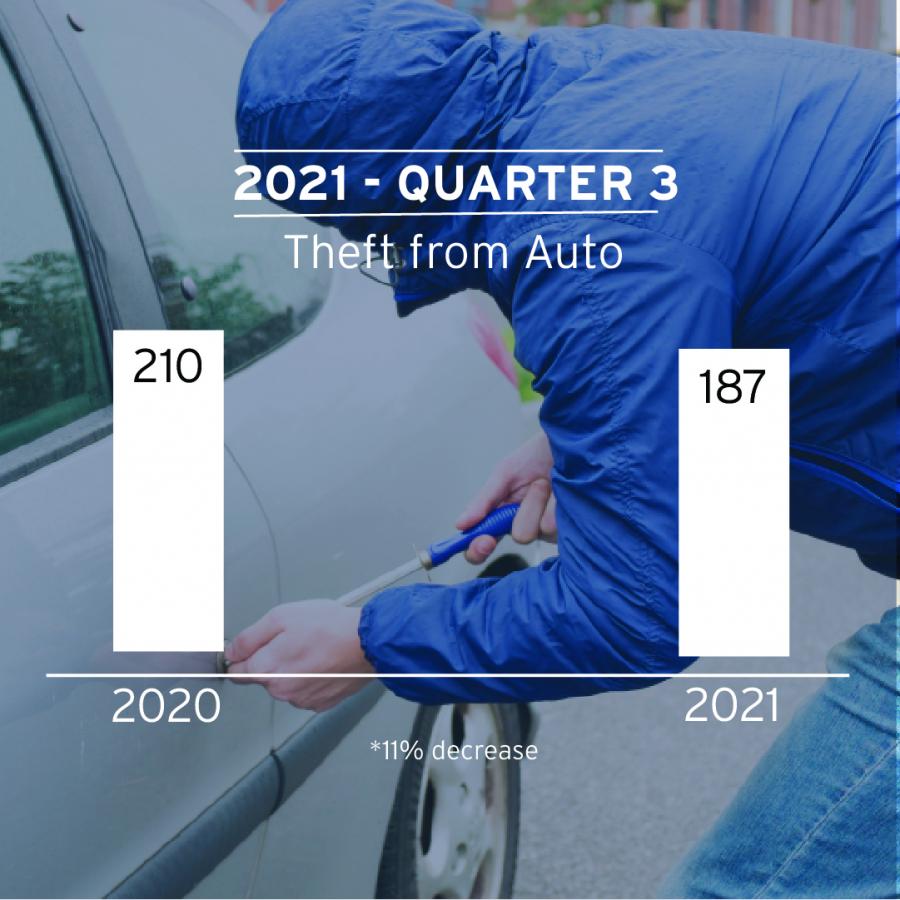 Thefts from vehicles were down in the third quarter of 2021, with 187 incidents reported to police, compared to 205 in the second quarter of 2021. Thefts are also down 11% in comparison to the same time frame, last year. These thefts include thefts of catalytic converters.

“Thefts from vehicles often goes in cycles or waves,” explains DC Sidhu. “We try and alert residents whenever we notice a trend in any one area – through a combination of social media, sign boards, or even alerts door to door when needed. However, the best advice I can give is to never leave anything of value in your vehicle, and to report any suspicious activity. We’d love for Delta to develop a reputation for being a poor hunting ground for this type of property crime.”