Police dogs and handlers a valuable resource for Delta

They found fleeing drunk drivers, missing high-risk youth and stopped determined armed suspects – responding to a total of 1,520 calls for service in 2021.  Delta’s three police dog and handler pairs, who are part of the Lower Mainland Integrated Police Dog Service, recently looked back at the past year.

As part of an integrated unit, their scope of operations goes beyond Delta, and they, along with the 45 other dog and handler pairs, serve nearly two million Metro Vancouver citizens.
Throughout 2021 the Integrated LMD Police Dog Service team responded to 192 calls for service in Delta. Break and Enters were the most common call type, while assaults and searching for weapons were also frequent reasons why the dog teams were called by front line officers.

Some of the most satisfying work for dogs and handlers is when they can successfully locate missing suspects and missing persons. The three Delta dog-handler pairs were successful in doing so more than 150 times in 2021.

This past year was the debut for the team of Delta Police Constable Sarb Singh and his new dog Laska. 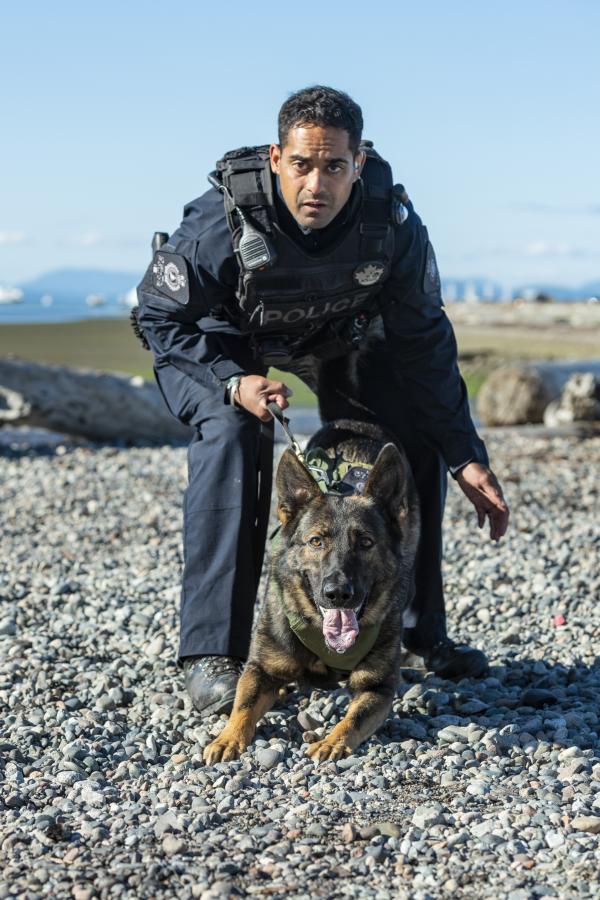 “There are many occasions where these dogs have made a critical difference in our work. For example, last year Cst. Singh and Laska attended a collision in Delta, where the driver was fleeing the scene on foot,” explains Superintendent Guy Leeson, who oversees the DPD officers seconded to integrated teams. “They caught up to the suspect, and after noting symptoms of impairment, the suspect was taken into custody without issue.”

In another incident Cst. Singh and Laska came to the aid of a fellow Delta PD officer who was involved in a struggle against a suspect actively fighting and fleeing from police. The suspect had assaulted the officer and also had presented a knife. Unfortunately use of force tools, including a taser and OC spray, had not yet resolved the situation.

Laska successfully controlled the suspect, despite being hit at with keys. Due to Laska’s tenacity, the suspect was taken into police custody.

“Our handlers and their dogs are incredibly dedicated, and they are such a fantastic resource for our community,” says Supt. Leeson. “For example, Constable Chris Cottrill and his dog Garner had a great success here in Delta last year where they were able to successfully track a youth who was suicidal.”

In another file Constable Carriere and his police dog Libby assisted on a robbery with weapon file where a taser was used by the suspect. While Cst. Carriere located and apprehended the suspect, Libby located the outstanding taser and stolen property that was used in the commission of the offence.

Delta Police Department is fortunate to have other dog and handler pairs, in addition to these traditional multi-profile dogs. The DPD also has two dogs trained to detect firearms and drugs, as well as a Victim Service Dog. In 2021 Delta Police also had three officers participating in a development program, volunteering as quarries, to raise puppies who would be future police dogs.