The Delta Police Department (DPD) develops a comprehensive operational plan to ensure a safe and festive Halloween for our community. This includes various public safety messaging around banning of fireworks, pedestrian safety and impaired driving. The department deploys additional resources to assist with increased calls for service and works collaboratively with partners at the School District, Delta Fire and City of Delta staff to ensure there is presence and visibility to help our community remain safe.  Fireworks, noise complaints, assaults, and property damage make up the bulk of these additional calls.

During Halloween night on October 31, 2022 hundreds of youth and young adults gathered in the area of South Delta Secondary School (SDSS) and Dennison Park. The unlawful assembly resulted in damage to property, mischief and assaults.  Delta Police are asking anyone with digital media of the event or of the surrounding area to provide it to Police to assist in identifying offenders. Video can be uploaded to our digital evidence portal at https://dpd.ca.evidence.com/axon/citizen/public/22-24806

A video has been included to demonstrate the disruption of this gathering and can be viewed at https://youtu.be/OSQqjxdhcQA or below.

In Tsawwassen, officers saw a gathering of youth estimated to surge up to 400 people. At times, the group developed a crowd mentality where individual levels of responsibility evaporated. Halloween 2022 at Dennison Park and SDSS was a deliberate attempt to damage property, cause disruption, and impact public safety. Enough fireworks were brought to the location to create a continuous disturbance lasting in excess of four hours.

Fireworks were deliberately fired at youth and bystanders, including first responders who were intentionally targeted.  Sprinkler heads were damaged on the Dennison Park football field.

Several assaults did occur, including deliberate acts involving fireworks. Property damage reports have been received and are expected to increase today once homeowners assess their properties in the daylight. Noise disruptions were evident through increased police calls for service and are also well documented on local social media pages.

Several youth were hurt, and one significant injury occurred when a youth was struck by a firework.  Her jacket caught fire and caused burns to her upper arm and shoulder. The identity of the person responsible for this injury is not yet known.

Two Delta Police officers received injuries during the night related to actions in Tsawwassen.  Both injuries are minor but have initiated Worksafe BC claims.

We are disappointed with the lack of regard for our neighbours, and our community.

The DPD are working with our partners from the Delta School District and the City of Delta to further investigate this incident.

Ladner and North Delta saw youth gathering complaints as well as multiple fireworks and noise complaints. In one instance, a North Delta father supervising trick-or-treating youth was targeted by unknown youth in a bear-spray assault.  This investigation is ongoing. In another instance, a port-a-potty was destroyed when it was blown up with fireworks.  In a third event, a fire at the Mackie Park turf field was quickly extinguished by the Delta Fire Department.

The cost of damage is unknown at this time. 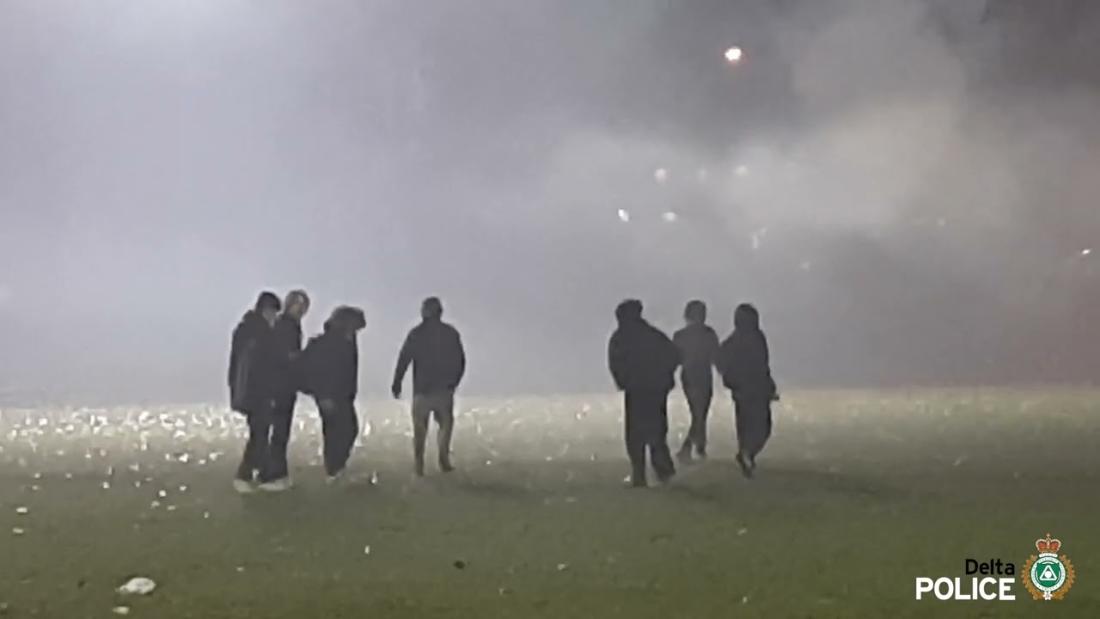