Property crime below average in early 2021, but collisions trending up

“Unfortunately at the end of the first quarter this trend began to swing the other way, and so far in the second quarter thefts from vehicles has been trending up,” notes Inspector Ciaran Feenan, head of frontline patrol. The issue has been two-fold he explains, including theft of items from vehicles, as well as thefts of catalytic converters, which are literally being sawed off.

“We have a team in place that monitors crime trends on a weekly basis, so we addressed these issues quite proactively, with increased patrols in the middle of the night, as well as an education campaigns,” he says. The patrols paid off with arrests in the first quarter with both types of crimes.

Police are also recommending that commercial fleet operators, and owners of RVs and large trucks have their catalytic converters etched with the vehicle license plate. The DPD is encouraging motorists to speak with their mechanics during their next service, and inquire if etching services can be provided. The District Liaison Officers have been speaking with local service shops who are in support of this initiative.

There was very little change in violent crime during this time period, with 174 incidents reported to police, compared to 177 in 2020. Violent crime refers to offences such as assaults and robberies. 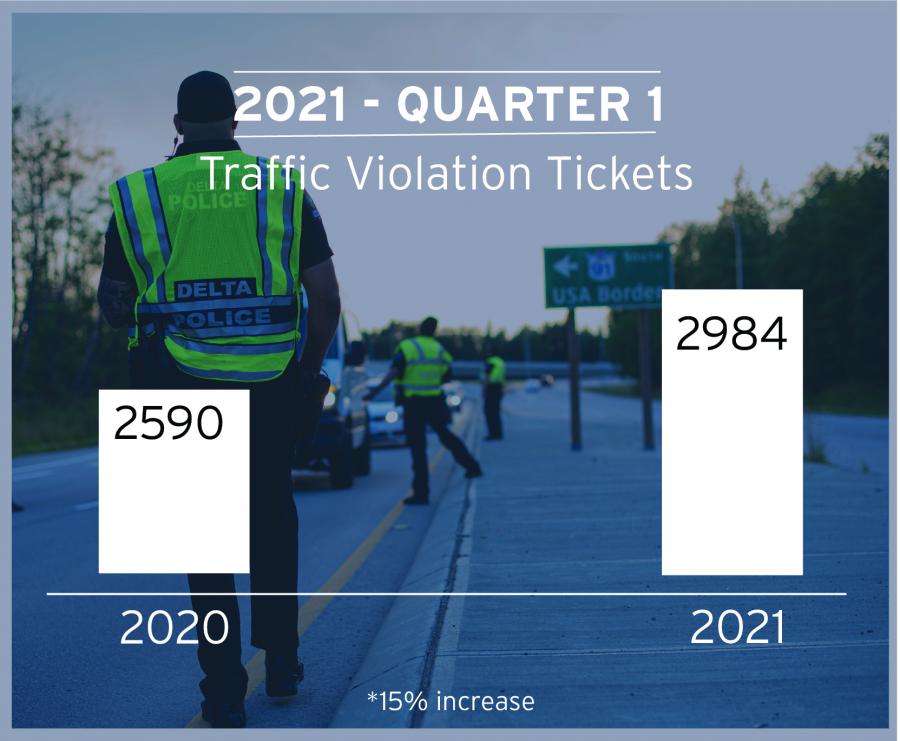 The number of collisions were up 5% in the first quarter, with 253 reported to police versus 240 in 2020. That trend is continuing into the second quarter and directly reflects the increased number of vehicles on the road, compared to the initial months of the pandemic. Violation tickets are also up significantly, with 2,984 tickets handed out in the first three months, versus 2,590 in 2020.

“With ticketing our focus is on the driving behaviours that lead to collisions and injuries,” explains Insp. Feenan. “That’s impaired driving, distracted driving and speeding primarily.  We’re targeting areas where we see more collisions, or areas where people have contacted us with concerns, such as school zones.”

You can see updated current crime trends on the crime map.